TORONTO, ONTARIO, April 24, 2019 – Toronto Real Estate Board President Garry Bhaura announced that Greater Toronto Area REALTORS® reported 4,731 condominium apartment sales through TREB’s MLS® System in the first quarter of 2019. This result was down by 6.8 per cent compared to Q1 of 2018.

“While we experienced a slightly better-supplied condo market in the first quarter of 2019, the market segment remained tight enough to retain the highest year-over-year rate of price growth compared to other major home types. Condos continue to provide prospective buyers with a relatively affordable housing option in the GTA, especially given the impact of the OSFI-mandated mortgage stress test,” said Mr. Bhaura.

Condominium apartment listings, in both the ownership and rental markets, can be influenced by the completion of new condominium apartment projects. According to CMHC, condo apartment completions were up substantially year-over-year in the fourth quarter of 2018, which could account for an uptick in condo ownership and rental listings in Q1 2019. Conversely, condo apartment completions were down year-over-year in Q1 2019, which could arguably impact listings in the opposite manner over the next three months.

“The condominium apartment rental market remained very tight through the first three months of 2019. Average one-bedroom and two-bedroom rents were up well-above the rate of inflation on a year-over-year basis in the first quarter. However, the condo rental market also benefitted from an increase in the number of units listed, resulting in more choice for prospective renters. With this said, we would need to see a number of quarters with listings growth outstripping rental transaction growth in order for the market to become more balanced,” said Jason Mercer, TREB’s Chief Market Analyst. 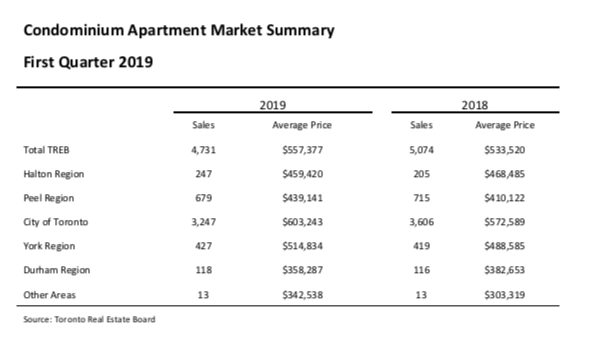 Over 53,000 residential and commercial TREB Members serve consumers in the Greater Toronto Area. Greater Toronto REALTORS® are passionate about their work. They are governed by a strict Code of Ethics and share a state-of-the-art Multiple Listing Service®. TREB is Canada’s largest real estate board.