There were gains in average lease rates reported on a per square foot net basis for transactions with pricing disclosed. The average industrial lease rate was up 11.3 per cent from $7.01 in Q3 2017 to $7.80 in Q3 2018. The average office lease rate was also up in Q3 2018 to $15.20, representing an 8.2 per cent increase from Q3 2017. The average commercial/retail lease rate in Q3 2018 was up substantially compared to Q3 2017. Much of this large increase was due to a number of higher end lease transactions reported in the City of Toronto. Generally speaking, average lease rates can change on a year-over-year basis due to changing market conditions and changes in the mix of properties leased, in terms of size, location and quality.

“The regional economy in the Greater Toronto Area continues to be strong, as indicated by very low unemployment. This suggests that businesses are continuing to expand and/or relocate to the GTA to take advantage of a large and diverse talent pool with experience across many different industries, including the tech sector, financial and professional services, construction and manufacturing,” said Mr. Bhaura.

“I believe the Greater Toronto Area is well-positioned to be a North American hub for trade, innovation and economic development. We have recently seen a number of technology companies commit to investments totaling over one billion dollars in our region. On top of the tech sector, the GTA also continues to be a leader in other key sectors, including finance, professional services, construction and manufacturing. This is obviously important as it relates to the future demand for commercial space,” added Mr. Bhaura.

Combined industrial, commercial/retail and office sales reported by TREB Commercial Network Members totaled 189 in Q3 2018, down from 270 in Q3 2017. Average selling prices, on a per square foot basis for transactions with pricing disclosed, were similar to last year for industrial space. The average selling price for office properties was down year-over-year. There was a significant jump in commercial/retail selling prices due to some very high dollar value transactions. Changes in average selling prices from one year to the next can be due to a combination of changing market conditions and changes in the mix of properties sold, in terms of size, location and quality. 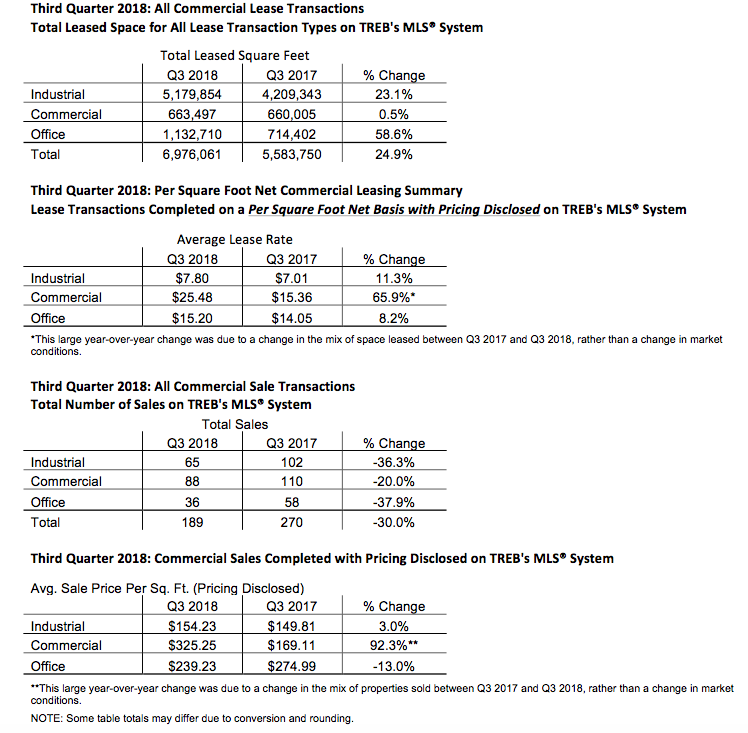 TREB is Canada’s largest real estate board. Over 50,000 residential and commercial TREB Members serve consumers in the Greater Toronto Area. Greater Toronto REALTORS® are passionate about their work. They are governed by a strict Code of Ethics and share a state-of-the-art Multiple Listing Service®.