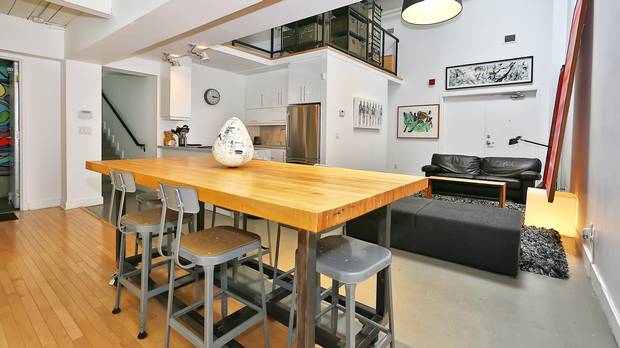 Because of wonky market, real estate agent Sandra Pate decided not to set an offer date for this hard loft in Leslieville.

Toronto’s fall real estate market continues to roll towards the end of the year in its own strange rhythm.

Houses are still selling briskly in some cases and sitting in others. One house that didn’t get a single bid on offer night drew three competing buyers a week or so later – with a higher asking price.

The Toronto Blue Jays playoff schedule often conflicted with offer deadlines and open houses, but committed buyers found a way to negotiate a deal while also keeping track of the score. The federal election may have created some uncertainty, but likely not enough to throw off buyers, agents say.

So that leaves the possibility that the market has returned to a more traditional fall pattern.

She says more listings are still arriving on the market and bidding wars are unpredictable. Buyers willing to consider an unrenovated house or one without parking might find a deal but properties that tick all the boxes are still sparking competition.

“The buyers that want everything are having a hard time because those houses are still hot.”

Ms. Pate and her partner Lina Risi recently listed a semi-detached house for sale on Browning Avenue in the city’s east end with an asking price of $789,000. They turned away a bully offer but then didn’t receive any bids on the scheduled offer date. They listed the house again with an asking price of $864,000 and said offers were welcome any time.

The buyers still held back until the agents cut the price to $829,000. That action immediately drew three competing bids and the house sold for $850,000 – or $61,000 above the original asking price.

“It all comes down to luck and timing,” she says.

She points to a Riverdale house that received three offers this week and sold for more than $200,000 above the asking price of $1.549-million.

Ms. Pate wonders if the combination of Blue Jays games and election talk did distract buyers at times. She recalls heading out to one offer presentation when the streets were oddly empty.

“I was driving across town at rush hour and there was no traffic.”

Meanwhile, a renovated Edwardian at 59 Woodlawn Ave. W. went up for sale with an asking price of $1.949-million. Listing agents Sue Mills and Sarah O’Neill of Royal LePage Signature Realty say the day after they hung a “for sale” sign, workers on heavy equipment arrived to rip up the street.

That caused a bit of a kerfuffle for the agents’ open house but by the weekend the pavement had been restored.

Ms. Mills says she had considered reviewing offers on Tuesday night but she knew a Blue Jays game was scheduled for that evening. She had already chosen Wednesday night when she learned that the Jays would also play on that day. But that game was earlier and therefore less likely to be a distraction, she says.

She also didn’t want to wait until Thursday because a delay also poses a risk. Buyers sometimes become jittery if they have to wait too long before bidding, she says.

“It’s an emotional process when you’re buying and it’s stressful putting in an offer.”

As it happened, the Blue Jays won their game against the Kansas City Royals that night and the city erupted.

“Everyone was in a super good mood,” says Ms. O’Neill, adding that all of the participants were checking their phones for updates on the game. “We definitely didn’t lose anyone to the Jays game. Everyone came to the table.”

With the market so patchy, Ms. Pate decided not to set an offer date for a hard loft on Carlaw Avenue with an asking price of $949,000.

The I-Zone is one of the original hard loft conversions that began the transformation of a gritty industrial area into the popular Leslieville neighbourhood.

Ms. Pate says the work-live lofts often attract artists and photographers. This two-storey unit makes a good space for a home business because it has a private entrance directly from the street, she adds. It’s recently renovated and also offers the potential for a rooftop terrace.

She adds that the owner is moving out of the city so he’s selling the loft with the art, furniture and light fixtures included.

Still, activity has been slower than expected, she says. After two weeks, the loft is still on the market.

Possibly the market is becoming more balanced, she says, which is a change she would welcome after the frenetic pace of recent months.