“It is clear that sellers’ market conditions in many parts of the GTA are driving price growth. However, looking at the detached market segment in the City of Toronto in particular, growth in the average selling price outstripped growth in the [board’s index],” said Jason Mercer, TREB’s director of market analysis, in a statement.  “This points to the fact that the mix of detached homes sold this year compared to last has shifted towards more expensive properties.”

Even the sale of homes worth more than $2 million is on the upswing in Toronto. Re/Max Realtron says sales in that category climbed 45% in the first quarter compared to a year earlier.

“The value proposition of the Greater Toronto Area remains remarkably attractive, drawing affluent purchasers from both here and abroad,” said Barry Cohen, who specializes in high end properties for Re/Max. “The timing has also added to the mix, given that quality inventory in the city’s robust housing market is seriously depleted. Combine those factors with low interest rates, solid stock market performance, and a strong American greenback, and the likelihood the surge in the upper end will continue is relatively high.”

The strength in Toronto’s housing comes as most of the country is seeing a pullback in sales and prices with the exception of Vancouver, the country’s most expensive market.

The Real Estate Board of Greater Vancouver reported a 53.7% jump in sales in March, which were 26.7% above the 10-year average for the month. The average detached home in the Vancouver area sold for $1,406,426 in March.

As the two cities continue to show strength, the sales volume is likely to put more pressure on the average national price. This month Canada Mortgage and Housing Corp. increased premiums on mortgage default insurance for people with less than a 10% down payment, a move some say was aimed at Canada’s two hottest markets.

Paul Etherington, president of the Toronto board, said home ownership remained affordable thanks to lower interest rates. On Monday, Toronto-Dominion Bank lowered the rate on its five-year fixed rate mortgage to 2.74% — the lowest ever in that category for a major bank.

“A substantial amount of pent-up demand remains in place, especially as it relates to low-rise market segments. This suggests that strong competition between buyers, which has fuelled strong price growth so far this year, will continue to be experienced throughout the spring,” said Mr. Etherington, in a statement. 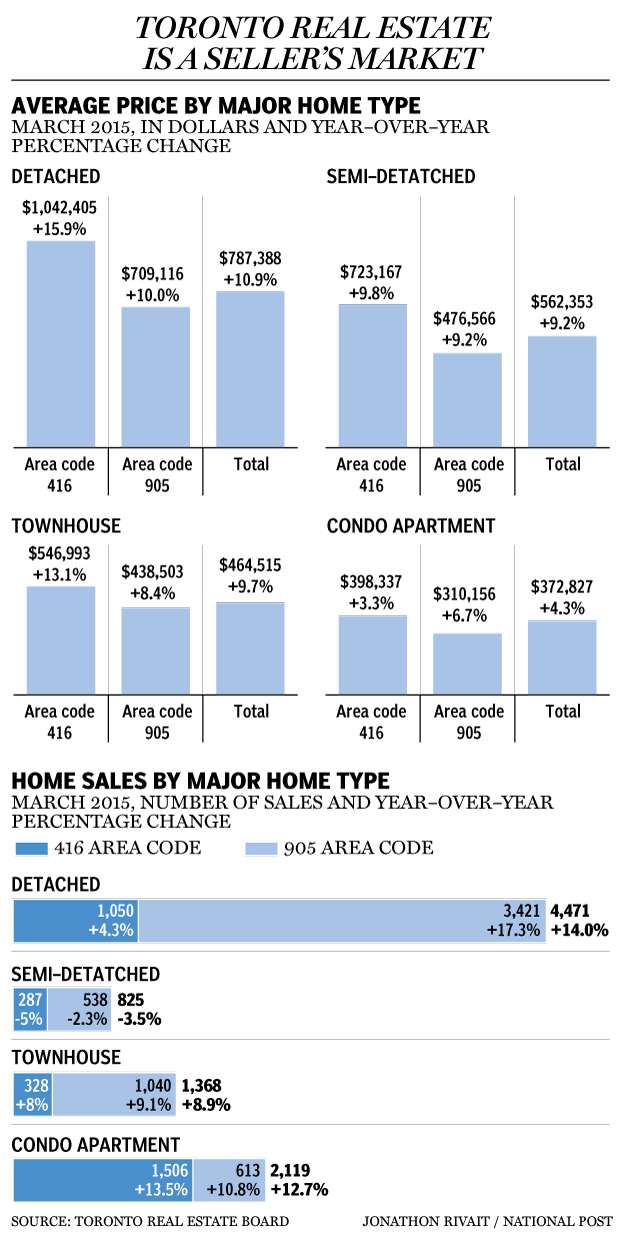