Toronto Regional Real Estate Board President Michael Collins is reporting results for the first 17 days of April 2020, in order to provide some guidance on the impact of COVID-19 on the Greater Toronto Area housing market:

• Greater Toronto Area REALTORS® reported 1,654 home sales through TRREB’s MLS® System during the first 17 days of April – down by 69 per cent compared to the same period in 2019.

o Year-over-year sales declines, in percentage terms, were greatest for the detached and condominium apartment market segments. In the detached segment, the higher end of the market was particularly impacted in the City of Toronto. The condominium apartment segment has traditionally attracted a high share of first-time buyers, who in times of uncertainty can put their decision to purchase on hold.

o Uncertainty about market conditions due to COVID-19 certainly played a role in moderating the pace of year-over-year price growth during the first half of April. The changing composition of home sales also played a role. In the City of Toronto, for example, the number of homes sold for more than two-million dollars declined more than overall sales. This also had an impact on the average selling prices.

“The state of emergency measures currently in place, including the necessary enforcement of social distancing, has impacted the real estate market in many ways. Home buyers and sellers have concerns about the economy and indeed their own employment situations. On top of this, many buyers and sellers are avoiding any type of in-person interaction. In the condo market in particular, individual condo corporations have curtailed entry for non-residents,” said Mr. Collins.

“All of the COVID-19 related issues and measures have translated into a temporary drop in the number of transactions – a drop that will persist until we experience a meaningful and sustained decline in the number of cases. However, once recovery begins, it will likely accelerate in earnest as buyers seek to satisfy pent- up demand that will build up over the course of the spring and at least part of the summer,” continued Mr. Collins.

“While the necessary social distancing efforts have certainly resulted in a substantial pause to housing transactions, it is possible that REALTORS® and their clients will be able to mitigate the impact somewhat through the use of technology. TRREB and its partner board and association Members can now take advantage of virtual open houses accessed through listing searches on TRREB.ca and REALTOR.ca. TRREB’s professional development staff are also holding virtual webinars on other ways REALTORS can leverage technology to help their clients in these challenging times,” said John DiMichele, TRREB’s CEO.

The calendar year average price for 2020 will likely remain near the 2019 level, and will be buoyed by the 15 per cent year-over-year growth experienced in Q1 2020 and resumed growth in Q4. Year-over-year declines in home prices could be reported during some months in the second and third quarters, but these declines will have less of an effect on the overall price for 2020 because the annual share of sales will also be much lower than normal.

“As we recover from this temporary downturn, potentially later this year, home buyers will move off the sidelines in increasing numbers as they satisfy pent-up demand for ownership housing. Increasingly, these buyers will be faced with the persistent lack of listings inventory that was a serious problem before the onset of COVID-19. As the different levels of government look toward recovery, it will be important for them to resume and build upon initiatives to bring a greater diversity of housing supply on line,” said Jason Mercer, TRREB’s Chief Market Analyst. 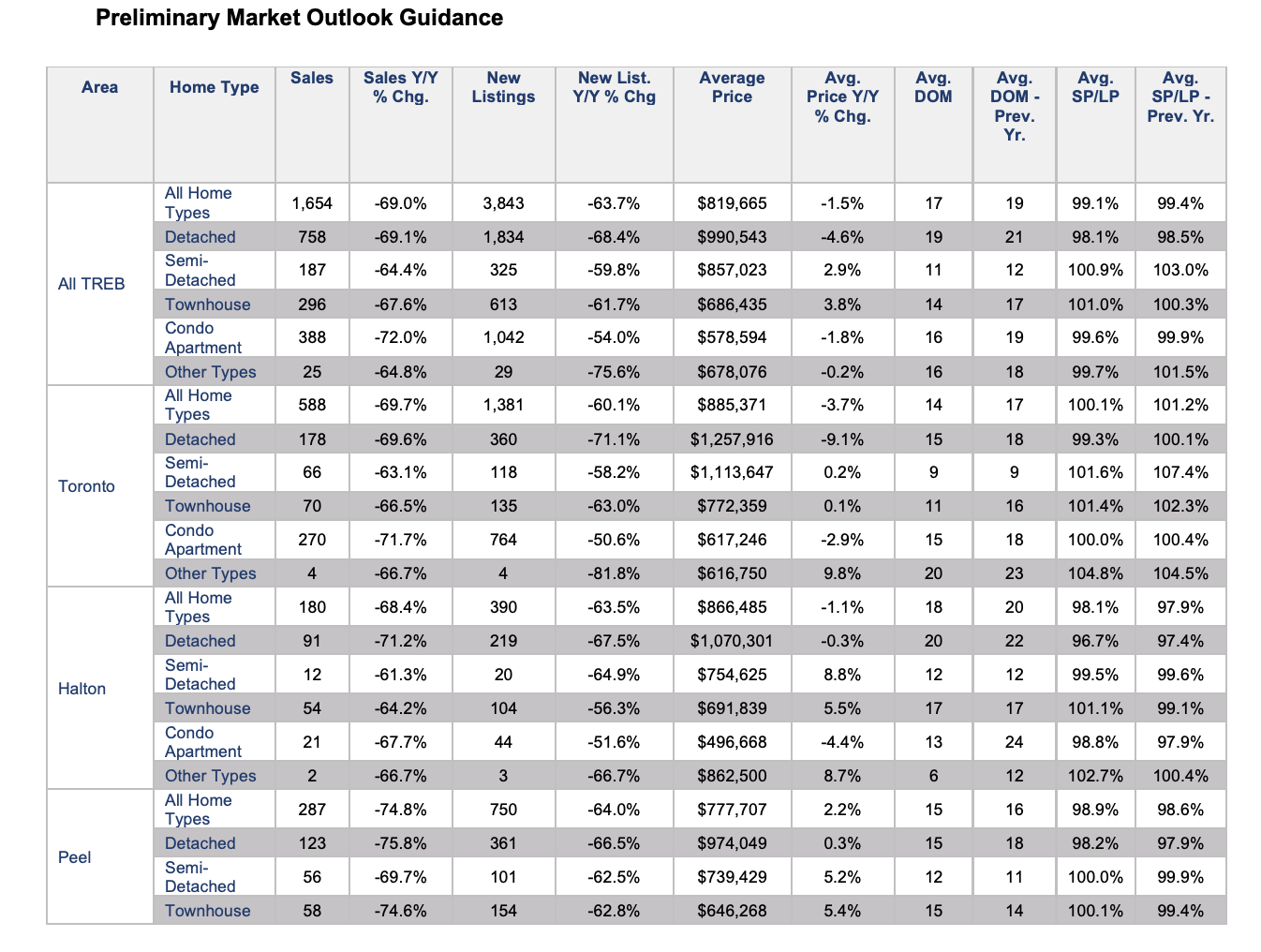 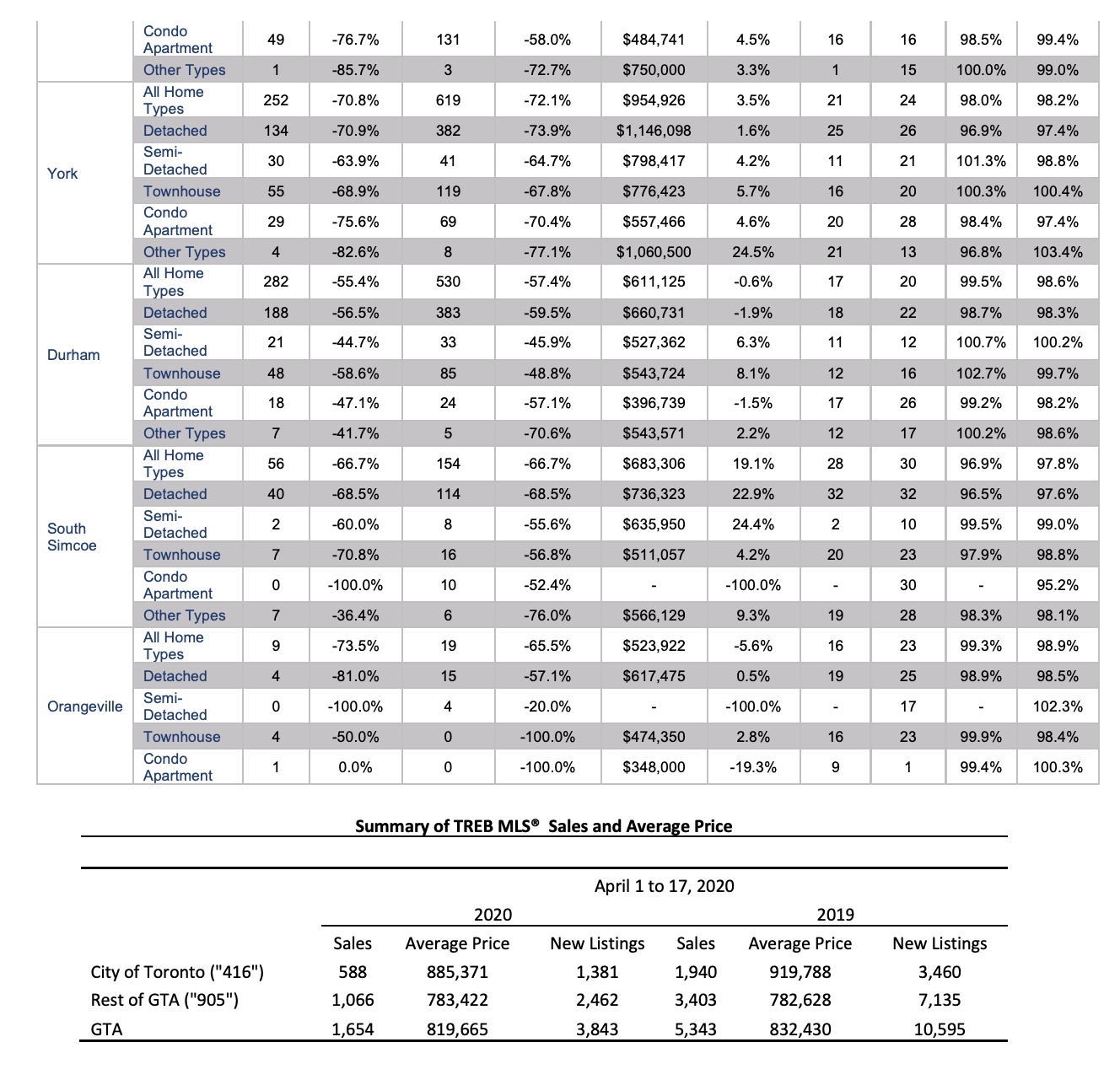