Almost two-thirds of space leased through TREB’s MLS® System was accounted for by the industrial market segment in November 2018.

It is important to note that annual changes in average lease rates can be the result of changing market conditions and changes in the mix of properties leased from one year to the next, in terms of location, size, mix and other related factors.

“While there are certainly issues of concern facing the economy, including recent announcements in the automotive industry and pressures facing the oil and gas industry in Canada, the GTA economy remains strong. The unemployment rate remains near historic lows in the region. As we continue to create jobs across many economic sectors, the demand for commercial real estate should remain strong,” said Mr. Bhaura.

There were 46 combined industrial, commercial/retail and office transactions reported through TREB’s MLS® System with pricing disclosed in November 2018 – down from 57 transactions in November 2017. Annual changes in average sale prices per square foot were varied based on changing market conditions and changes in the mix of properties leased from one year to the next. 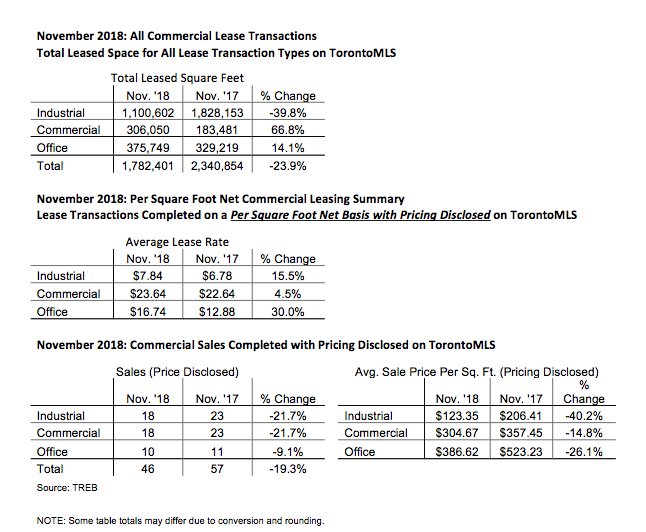