While almost all of us can relate to the frustration and hours of time wasted sitting in bumper-to-bumper traffic, Policies to Improve Goods Movement, a new report by the Toronto Region Board of Trade sheds light on a less immediately evident, but substantial, effect of gridlock in the GTA.

According to the Toronto Region Board of Trade, congestion on GTA highways slows the flow of goods and supplies moved on trucks to such an extent that it costs $500 to $650 million per year in higher prices on everyday consumer and business products. That works out to $125 per year in additional expenses for the average GTA household.

The Toronto Region Board of Trade’s series of reports, sponsored in part by TREB, focus on the Toronto-Waterloo Corridor, Canada’s largest manufacturing and transportation hub, spanning multiple census metropolitan areas, including the GTA, Hamilton, Barrie, and Kitchener-Waterloo.

The reports provide tangible policy recommendations that could help to improve congestion in the Toronto-Waterloo Corridor.

Among the solutions offered in the report are:

View an infographic of Policies to Improve Goods Movement below for an illustrative overview of the policy solutions proposed by the Toronto Region Board of Trade to address congestion in the Toronto-Waterloo Corridor.

For a more in-depth read, be sure to download the full 17-page Policies to Improve Goods Movement report, here . 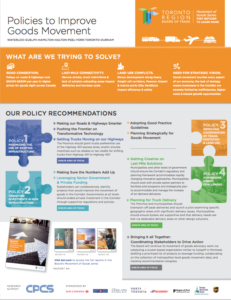