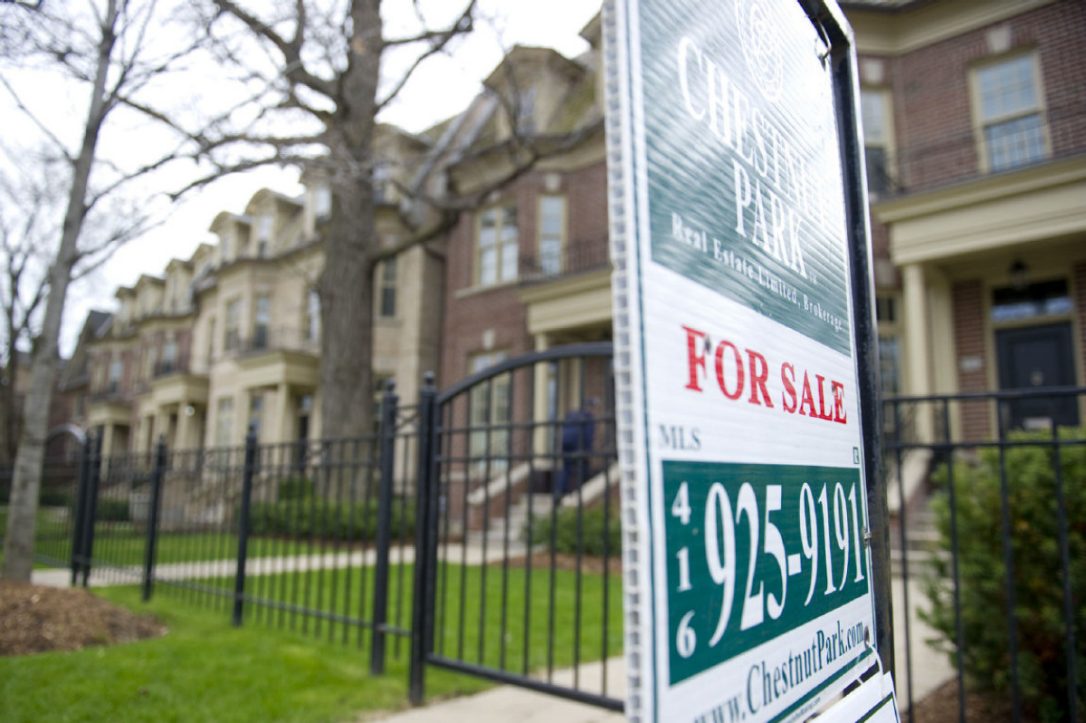 House prices in April were 16.2% higher than in April 2015, according to the Toronto Real Estate Board.

The average sale price for Toronto area homes last month was $739,082, more than $100,000 higher than the average of $636,094 in April 2015, reflecting a demand for higher priced properties, said the Toronto Real Estate Board.  (CARLOS OSORIO / TORONTO STAR)

The Toronto region’s heated housing market shows no signs of reversing its record-setting streak this spring, with April sales up 7.4 per cent and prices 16.2 per cent higher than the same month last year, according to the latest statistics from the Toronto Real Estate Board (TREB).

That reflects a demand for higher priced properties due to price growth generally and homeowners moving up from semis or smaller detached homes looking to take advantage of lower mortgage rates, said TREB director of market analysis Jason Mercer.

A short supply of listings continues to drive many of the conditions facing buyers frazzled and frightened by white hot bidding wars and bully offers where aggressive purchasers move in on properties before the designated deadline for offers.

That stress isn’t expected to let up any time soon, said Mercer.

“There is a lot of competition between buyers. It gets down to the fact that there are a lot of people who are upbeat about the purchase of housing but at the same time, they’re having real difficulty finding a home that meets their needs in some cases,” he said on Wednesday.

The shortage was particularly severe in semi-detached home sales in Toronto, which dropped about 11 per cent compared to last April. Even in the surrounding 905-area market, semis were the lowest growth housing category with only a 2.8 per cent increase.

Semi-detached homes also saw the biggest percentage growth in prices at about 24 per cent in Toronto.

“It’s just that we haven’t seen a lot of listing. You think about someone looking to make that move into the low-rise market, that would be a popular home type if there are listings available. The fact is there just hasn’t been a lot of listings and that’s fed through to sales,” said Mercer.

Detached home and townhouse sales also declined in Toronto, year over year in April by 4 per cent and 2 per cent respectively.

TREB attributes some of shortage to the reluctance by homeowners to list re-sale properties due to the “second substantial land transfer tax” in Toronto. Provincial land use policies have also led to a smaller supply of new construction housing in the region, said Mercer.

“As the population continues to grow that (low-rise) home type has remained popular but we haven’t been building as much and that feeds back into the re-sale market as well,” he said.

Meantime, condo sales increased 15 per cent across the Toronto region compared to April of last year. About 2,000 of the 2,800 condos sold were within the city of Toronto.

“We’ve seen a lot of new project completions over the last two to three years, they did lead to apartments being listed on TREB’s Multiple Listing Service (MLS) system. What’s been interesting is that we’ve also seen an equal or greater uptick in the number of sales so we’ve essentially absorbed all that new inventory that’s come online,” he said.

A tight rental market has also meant some investors are hanging onto their condos longer.

The high prices and short supply of city homes are driving home buyers to longer commutes in search of those elusive detached family homes. Orangeville and South Simcoe County had some of the highest year-over year increases in single-family detached home sales in April at 18.9 per cent and 17.55 per cent.

Those areas also had some of the most affordable homes, averaging $426,357 among all housing types in the Orangeville area and $499,383 on average in Simcoe County. Durham Region also showed an average price of $494,653 in April.

While York Region had 18.31 per cent growth in single-family detached home sales, prices across all housing types there averaged $896,476.